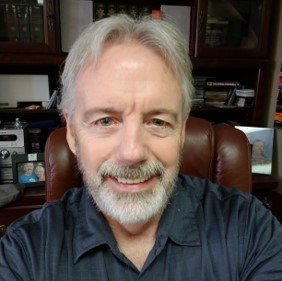 Coming from a broken home and growing up in the proverbial sixties it seemed as if even his quiet Midwestern environment wouldn’t be able to save Ken from a life of blatant hedonism. From his early days in Junior High and meeting under the bridge after school to smoke cigarettes to his entry into High School and his discovery of the Trinitarian god of sex, drugs, and rock ‘n’ roll, it seemed as if he only had one goal in life: to “feel good”.

One of the things that made him feel best was acceptance with the “in-crowd.” Maybe he was searching for the love of a lost father or maybe his pride simply enjoyed the prestige of being perceived as “cool.” Whatever the motivation, the drive for the proper image controlled much of his actions during his late teens and twenties.

His rampant promiscuity led to an out-of-wedlock pregnancy in 1975. Marriage to his wife, Sherry, followed and for the next several years, turmoil prevailed in their relationship as they both struggled with feelings of being entrapped and in bondage to each other. On November 7, 1981, Jesus intervened into a lost and otherwise meaningless existence. The Lord then began the process of turning their battled and scarred relationship into a picture of the union between Himself and His Bride, the Church. What had been conceived in the pit of hell was now truly “made in heaven.”

Very early in their Christian walks, Ken and Sherry became involved in Calvary Chapel Ministries through Calvary Chapel Wichita, Kansas. Learning the ministry through hands-on, on-the-job-training he also attended and subsequently taught at the Calvary Chapel School of Theology in Wichita.

Receiving his ordination to the ministry in 1987, Ken and his family pioneered Calvary Chapel in Oklahoma City in the fall of 1990 where he currently serves as pastor. One of the ministries of this local fellowship is Josiah Media (named after King Josiah and the radical reforms that took place after he and the nation had “discovered the Word”), a tape ministry containing hundreds of free Bible teaching cassette tapes. The Lord has allowed Pastor Ken to author several gospel tracts as well as Follow Me, a 145-page book about discipleship, servanthood and the ministerial relationships in the local church setting (download PDF version here or the new Microsoft XPS version here).